Pentucket Publishing has released my novel Cracking the Ice, which was released in hardcover by WestSide Books two years ago. 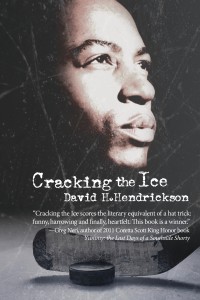 In 1968, at the height of the Civil Rights struggle, Jessie Stackhouse leaves home to break the color line at an elite, all-white prep school. He arrives filled with dreams of winning championships and eventually playing in the NHL, but soon finds that the coach doesn’t want him there and neither do most of his teammates. They’ll go to almost any extreme to make him leave. Jessie must overcome not only the team in the other locker room, but the even more dangerous one in his own.

“A worthy, if heartwrenching read…. The best of humanity is explored — and some of the worst, exposed. It is very readable, written with a clear and powerful voice, and is engaging from beginning to end.” — Long and Short Reviews (four stars)

“One of the most interesting books I’ve read this year, a one-of-a-kind book.” — Reading in Color

“Cracking the Ice scores the literary equivalent of a hat-trick: funny, harrowing and finally, heartfelt. This book is a winner.” –Greg Neri, author of Yummy: the Last Days of a Southside Shorty, a 2011 Coretta Scott King Honor book

“The riveting plot and realistic characters powerfully expose the racial stereotypes, racism and violence that plagued African-American students recruited to elite prep schools in the late 1960s and early 1970s. Hendrickson shows the turmoil of these critical years through the eyes of his story’s heroes, villains and victims, marvelously and realistically portraying one of the most critical moments in school integration and civil rights.” — Lillie Johnson Edwards, Ph.D., Professor of History and African-American Studies at Drew University