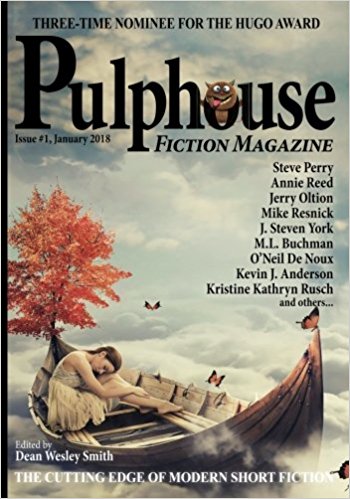 It's my pleasure to be part of the resurrection of the legendary magazine Pulphouse. My story, "Looking for the Bastard," appears in issue 1 (Jan. 2018). "I loved the story," commented Tangent Online.

"This is definitely a strong start. All the stories have a lot of life to them, and are worthwhile reading."

“In the Empire of Underpants” by Robert T. Jeschonek

“Queen of the Mouse Riders” by Annie Reed

“The Heart Has Reasons” by O’Neil De Noux

“Looking for the Bastard” by David H. Hendrickson

“The Reign to Come” by Kevin J. Anderson

“A Spud Full of Stars” by Kent Patterson

“A Few Minutes in The Plantation Bar and Grill Outside Woodville, Mississippi” by Steve Perry

“At Witt’s End: A Spade/Paladin Conundrum” by Kristine Kathryn Rusch

The full-fledged first quarterly issue of Pulphouse is now available, with a mix of both reprints and new stories.

The first original is "Queen of the Mouse Riders" by Annie Reed, where Sarah is awakened with a problem with mice riders—humanoid mice-like (miceoid?) creatures who ride mice themselves and seem interested in Sarah's cat, Starlight. She discovers they are there to take Starlight (who they call a dragon) to their world because she is their queen. A charming and whimsical story; my only complaint is that things go too easily for Sarah.

Valerie Brook's "The Sea Girl’s Survival" tells the story of Abby, whose life has been uprooted after the death of her parents, where she had to move from Alaska to New Mexico to live with her relatives. Abby is not built for the hot, dry climate and starts to dream of water and the ocean and finds ways to escape to somewhere more to her liking. I liked the character of Abby and her plight is well drawn, but the story didn't quite come together for me.

"The Reign to Come" is the story of Aykin, a young boy who is certain that he will be the one to replace the recently deceased emperor, and joins the throng waiting to put their case in front of the court wizards who will make the decision. Kevin J. Anderson's story isn't bad, but depends on a plot twist I guessed fairly early on.

"Body Memory" by M. L. Buchman is hard SF about a man who works in space and keeps losing body parts that are replaced with new ones, and begins to see that he's losing more than that. It's an SF version of an old philosophical point, with a real human question.

Steve Perry's "A Few Minutes in the Plantation Bar and Grill Outside Woodville, Mississippi" focuses on an old blues musician who is approached by a mysterious figure who wants to offer him something very special for playing the "Devil's music." The identity of the stranger becomes clear early on—it's not intended to be a twist, though the story does have one at the end. A fun story, especially if, like me, you are a fan of the blues.

Technically, "At Witt’s End: A Spade/Paladin Conundrum" is a mystery, not an SF or fantasy genre story, but it takes place at a science fiction convention, so I'll bend the rules a bit. This is part of Kristine Kathryn Rusch's Spade/Paladin stories, in which Spade, a science fiction fan among other things, is asked to organize a charity auction of Brendan Witt, a fandom character who had collected a large number of fanzines and other memorabilia. One of the fanzines is stolen—one with a strange article that might be an indication of a time traveler, if anyone took it seriously. The mystery takes a back seat to the characters, especially that of Witt, an old curmudgeon who wasn't quite what people thought he was.

The last original story, "Looking for the Bastard" by David H. Hendrickson is solely a mystery noir. I loved the story, but it's not in the right genre to be reviewed. The rest of the stories in the issue are reprints.

This is definitely a strong start. All the stories have a lot of life to them, and are worthwhile reading.