Pentucket Publishing has just released my crime caper novel, Bubba Goes for Broke, written under the pen name David Bawdy. It’s available in all electronic formats; a trade paperback will be released in the summer.

Since it’s an R-rated novel — you might call it bawdy — I felt compelled to use a pen name to distinguish this book from my forthcoming Young Adult novel, Cracking the Ice.

Sample the first two chapters of Bubba Goes for Broke. If you don’t laugh, check your pulse. 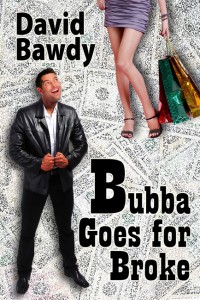 If a dim-witted, sex-crazed crook falls in love, does he get any dumber? You can bet a boob-jobbed Hooters waitress he does. And when she wants to become a televangelist with a little something extra, guess who’s going to pay? Meet Bubba Winslow.

Available for $4.99 in all electronic formats on Kindle, NOOK, Smashwords, Sony, Apple, Kobo, and many others.

(Cover by Renee Barratt at The Cover Counts.)

“I was laughing so hard, I could hardly see straight.”